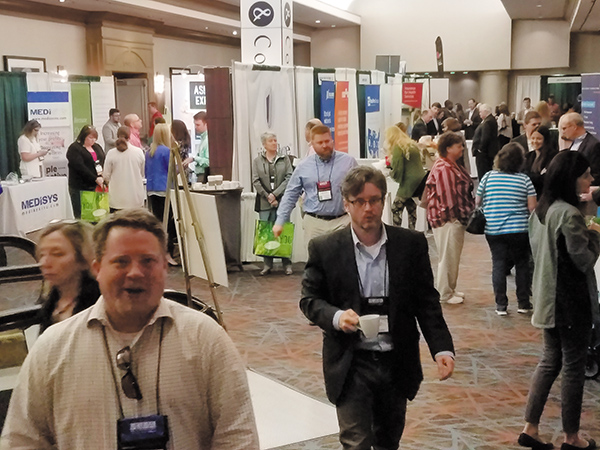 The conference was well attended. "We had 264 people," said Jason Biddy, practice administrator at Urology Centers of Alabama. "A good portion of those were new members."

A group of Auburn students also attended. The students had the opportunity to see how their studies were applied in the real-world while interacting with working administrators.

62 vendors participated in the conference. Traffic was brisk at the vendor booths, with one vendor saying he had as many visitors the first morning as he had for the entire conference last year.

Cynthia Taylor with AMT Staffing agreed. "The conference has been great," she said. "I've had the opportunity to meet people from all over the state. They're given me good feedback, letting me know what their needs are.

"A lot of people have stopped by our booth. People seem more engaged with the vendors this year. I have a lot of leads."

This was the first Alabama MGMA conference for Ron Prevatte who recently joined Integrated Solutions. "It's been a great opportunity to meet new people as well as existing clients who I had not met face to face," he said.

The conference, which was titled Leadership Through Chaos, focused on a number of issues that are relevant to practice administrators in today's environment. Cameron Cox, the CEO of MSOC Health, talked about social media and dealing with online reviews. Jerry Callahan, CPA and Margaret Cook, MBA of Kassouf & Co gave a talk on benchmarking for process and practice improvement. Adele Allison, of the DST health solutions division, hosted breakout sessions on contract negotiations and on MACRA. There were also talks on financial management; workplace violence; organizational governance; digital security; relative value units; ACOs and RCOs; and the Trump administration's impact on healthcare.

"I think that a lot of administrators are interested in learning what to expect from the new Trump White House," Jason Biddy said. "People are trying to understand what's going to be repealed and what it will be replaced with.

"Healthcare is no longer boring," said Helen Combs, the administrator of Alabama Allergy & Asthma Center. "We now have some new initiatives that are bringing to light all sorts of quality measures. Federal healthcare reform started out under the Bush administration with PQRI which was a voluntary process for clinical reporting. We've now moved into a system where providers are incentivized to report on quality or meaningful use, which means the payers are measuring the quality of our outcomes, some of that based on cost. Then we're moving into MACRA which is merit-based or advanced alternative healthcare models. And where we're going to end up is affordable quality healthcare

"One of the challenges we face is to make sure the physicians fully understand the long-term impact of merit-based pay. And we have to focus on how to implement this. Gone are the days where we can just ignore these issues."

Richard Sanders of The Sanders Law Firm spoke on the final morning, giving a thorough analysis of the Republican proposals regarding the transition from Obamacare.

The practice administrations in attendance all walked away with an enhanced understanding of current issues along with tools for working through them.

"This was my first time attending the MGMA Alabama winter conference," said Jennifer Wood, CPC who is the administrator for Premier Medical. "The conference was a great event that provided an invaluable networking experience and the ability to learn from some of the highest caliber medical practice managers in the state of Alabama."