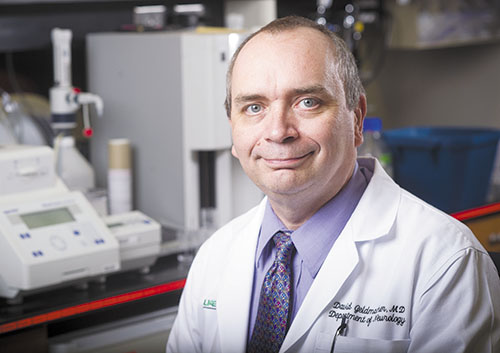 Today, 89,000 people in Alabama suffer the devastating effects of Alzheimer's disease. That number is expected to triple by 2050 unless medical science can find an effective way to stop it.

UAB is participating in the first national clinical trial of a drug aimed at preventing the irreversible damage of AD before symptoms arise.

"Advances in PET scans allow us to see accumulations of amyloid protein in the brain long before memory loss becomes apparent. The investigational drug targets that protein, and we're hoping it will reduce or slow buildup to possibly prevent damage or delay the disease," UAB principle investigator David Geldmacher, MD, of the Memory Disorders Division said.

"To this point, once brain cells are damaged, we haven't found a way to replace them. So it seems that, like polio, the most effective cure is prevention. That's the direction research is pivoting," Geldmacher said.

The A4 study (Anti-Amyloid in Asymptomatic Alzheimer's) was recently featured in Newsweek. UAB was selected as one of the clinical trial sites across the country that together will be recruiting 1,000 participants for the study. It is estimated that 10,000 volunteers will be screened to find around 10 percent who qualify.

"Since we are recruiting healthy volunteers, we will need to do screenings and PET scans to determine which people are showing accumulations of amyloid proteins that indicate the developing plaques of the disease process. Another key part of the A4 study is looking for clues as to why AD rates are higher among African American and Hispanic populations," Geldmacher said.

"Washington University in St. Louis found that plaque development can begin as early as a decade before symptoms appear. That fact, combined with the ability of PET scans to detect those plaques early, gives us a window of opportunity to test therapies that might be able to slow or stop the buildup before the amyloid protein triggers a cascade of changes that cause irreversible damage.

"If we can remove amyloid proteins or block future buildup, we might be able to take a therapeutic approach to AD that is much the same as we take in controlling cholesterol to prevent heart disease," Geldmacher said.

Amyloid protein, though the most familiar suspect in the development of Alzheimer's disease, is not the only factor involved. Other proteins and more than 30 genetic changes can also play a role, which may eventually reveal why some populations are more likely to develop the disease than others.

"Tau, the other protein most suspected of being involved in the development of AD, is also being studied by UAB researchers. Substances that seem to reduce it have been identified and we hope that within a few years we will be testing medications that target that protein to see if we can find more therapies to prevent Alzheimer's disease.

"We're also looking at other drugs to ease symptoms in people who already have AD. Most medications used to manage it have been around a while, and we hope to see improvements," Geldmacher said. "Sleep problems are common due to a breakdown in melatonin cycling that disrupts circadian rhythms. If we can find better ways to regulate the sleep cycle so patients are better rested, it may help to avoid difficulties that occur when fatigue becomes a problem, especially late in the day. Low light levels at twilight and in the evening add to confusion by making it harder to distinguish what is happening. Surroundings that look less familiar in a darker room, combined with fatigue, can make the end of the day a difficult time.

"To help patients, their caregivers and families avoid distressing situations and better manage the daily routine, the UAB Memory Disorders Division is using telemedicine to coach caregivers on how to interact with patients more effectively," Geldmacher said.

"Caring for people with AD and treating the disease after it has progressed is challenging for everyone. That is why I am so hopeful that we can spare future generations by finding a prevention strategy that works."

If you are interested in volunteering for the A4 study, you can learn more about how to enroll by going to the website A4study.org.