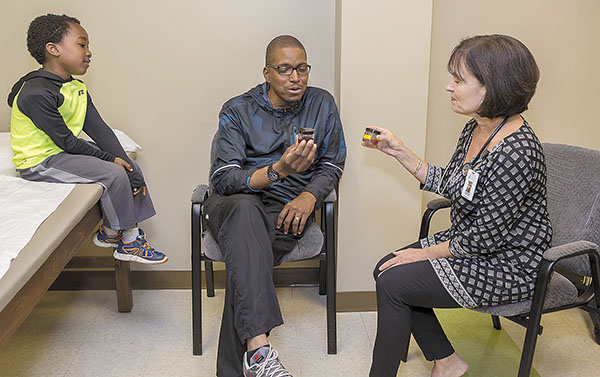 Peanut allergy is the leading cause of anaphylaxis and fatal outcomes from food reactions in children. A new oral immunotherapy (OIT) treatment is proving to be a safe and effective way to eliminate the effects of the allergen in many sufferers through controlled exposure to peanuts.

"There has been a big emphasis on peanut allergy because peanut is so hard to avoid," says Carolyn Comer, MD, Medical Director of the OIT program at Alabama Allergy & Asthma Center in Birmingham. "The gold standard treatment right now is avoidance of the allergen and having epinephrine available for emergencies. Unfortunately, deaths can occur from anaphylaxis even when epinephrine is used."

Recent studies at Stanford and Duke universities have shown that if you give allergic children a slowly increasing amount of peanut orally over time with careful monitoring, it can be added back safely into the diet of children with severe peanut allergy. Currently, children can safely begin OIT as early as 4 years of age.

To qualify for OIT, a child must have a history of peanut reaction with ingestion and a positive skin test and/or elevated specific IgE to peanut in the blood. Dosing starts with a small amount of peanut protein and increases over time. "One peanut kernel has, on average, 250 mg of peanut protein. Our protocol begins with 2 mcg and builds every one to two weeks until 2,000 mg of peanut protein is reached once a day, the equivalent of eight peanuts," Comer says. "The build up process takes six to seven months on average and can be individualized as needed. At-home maintenance of 2000 mg once daily is continued indefinitely. We will follow the child's specific IgE blood levels for peanut and skin reactivity, and their numbers should decline over time. Some children's levels will go down to zero, which is fantastic."

The initial dosing and subsequent increase in dosing are done in Comer's office with one-on-one monitoring by medical staff who are appropriately trained with equipment readily available to treat anaphylaxis. Total focus is on the child to ensure they are monitored and safe. Comer points out that when safety guidelines for at-home dosing are followed, OIT is less risky than allergy immunotherapy (allergy shots). "There is still a risk of reaction, but we keep safety at the forefront," she says.

Comer says there is a lot of anxiety around peanut allergy, but OIT offers the chance to eliminate those fears. "Studies have shown that OIT can be 85 to 90 percent effective for desensitization to peanut over time with many of these children freely eating peanut in their diet," she says. "OIT gives the child and family another alternative besides strict avoidance. Studies show that if the child continues to take a daily dose of peanut, she is protected from accidental ingestion and cross contaminant. Unfortunately, if the daily dose is discontinued, there is no guarantee that the child will have sustained unresponsiveness."

Successful results from OIT can be life-changing for patients. "The child can go out with friends and family members without the worry of accidental ingestion and anaphylaxis. Even if the child never wants to freely eat peanut, OIT takes away the fear factor of accidental ingestion," Comer says. "It also helps eliminate food allergy bullying, which happens to more than a third of children and teens with food allergies. For these reasons, we plan to offer OIT to other food allergens, such as tree nuts, milk, and egg, in the near future."

Additional treatment options for food allergies currently are being studied. As these treatments become available, Comer and her colleagues will continue to offer OIT as an option for managing food allergy. "We know it improves the quality of lives of children and their families," she says. "OIT for peanut allergy still is not a mainstream practice with a lot of allergists, but we believe it gives the allergic child the freedom to be normal."