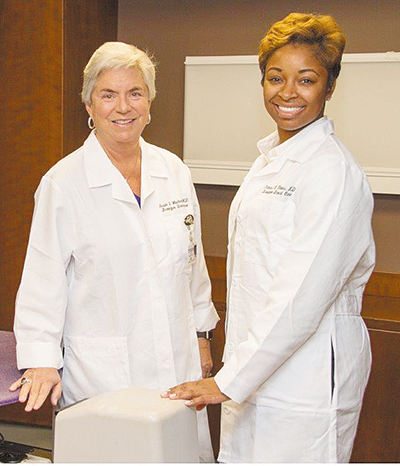 Many surgeons may not yet be aware of a new technique for breast cancer surgery that has recently emerged. The name - Hidden Scar surgery - describes the purpose.

"It's important for woman to not have a constant reminder of their surgery," says Susan Winchester, MD, a surgeon with Birmingham Breast Care. "Women come to me after lumpectomies or mastectomies feeling like they've been mutilated."

According to the American Cancer Society, more than 252,000 women in the U.S. face invasive breast cancer each year, with one in eight women being diagnosed with the disease at some point in their lives.

The Hidden Scar approach places the incision in an inconspicuous area of the breast, and an oncoplastic technique allows the surgeon to keep the contour of the breast. "It's also potentially more effective against the cancer because you can take more tissue, assuring the cancer has been completely removed with negative margins," Winchester says.

Depending on the location of the lump, the incision can be made below the hair-bearing area of the axilla, or in the crease under the breast, or around the areolar. In the areolar incision, a lighted retractor elevates a flap of skin and dermis over the superior part of the breast where the cancer rests. "So you're operating in a tunnel," Winchester says. "You remove the cancer making sure you've got a good margin, and then advance tissue into the defect."

The tissue is advanced over the marker needed for radiation. "Now that you've restored the contour, you drop the retraction, and the skin falls back down exactly where it was to begin with," Windchester says. "Then close at the areolar and, with time, that scar is not visible."

The certification for the Hidden Scar approach, provided by Invuity -- the makers of the lighted retractor -- requires about four hours of video presentations and proctoring at least five cases. Last year, Winchester performed around 130 oncoplastic breast surgeries using the method. She's also proctored her partner, Princess Thomas, MD, in the technique, along with four other surgeons from around the country.

The oncoplastic element of refilling the void takes additional training. Provided through the American Society of Breast Disease (ASBD), the five-day course includes intensive training using cadavers. "It's a large Investment of both time and money," Winchester says. "This method been used since the 1980's, mostly in Europe, and we've been slow to learn these techniques. So most general surgeons do not know this."

To fill in the defect left from removing the cancer, oncoplastic closure mobilizes surrounding breast tissue and advances that into the cavity. "If the surgeon knows oncoplastic surgery, then the defect can be filled in, so you can take a little more tissue and assure your margins are negative," Winchester says.

For women facing mastectomies, there is a procedure called the Nipple Sparing Mastectomy (NSM) that saves the nipple, allowing reconstruction to be as natural as possible. "The thing that defines the breast is the nipple," Winchester says. "The Janet Jackson wardrobe malfunction was not significant until the nipple was seen."

NSM uses a similar technique to Hidden Scar by using an inframammary crease incision, but removes all of the breast tissue while maintaining the blood flow to the nipple. "You have to be very careful not to devascularize the nipple or areolar complex. This takes experience, practice and training," says Winchester, who has performed over 30 of the procedures and never lost a nipple.

After the removal of the tissue, the plastic surgeon then has the entire breast flap in which to reconstruct the breast with the nipple intact. "This is especially great for all those facing the genetic mutations," Winchester says. "It's a prophylactic alternative that removes 95 percent of the breast tissue, but preserves the cosmesis."

Winchester had a young patient who tested positive for the BRCA1 gene and opted for preventive Nipple Sparing Mastectomy. "When she woke up, she saw her nipples, and she still had hopes of having whole breasts," she says. After reconstruction, "people couldn't tell she'd had a mastectomy."

Winchester does not recommend the NSM for cases in which the cancer runs within two cm of the areolar complex. Smokers are also poor candidates because of their small vessel disease. In the case of women with large breasts or those where the nipple droops below the fold, Winchester can remove the cancer and have a plastic surgeon perform a reduction.

Most women are candidates, and prefer Hidden Scar Surgery. "Patients are thrilled because they have no visible reminders of their breast cancer," she says. "Hidden Scar surgery paired with oncoplastic closure makes the breast look like it never had an operation."