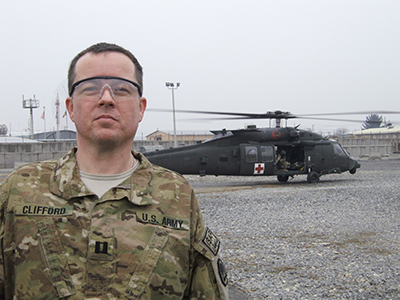 Bill Crawford, MD was deployed to Afghanistan and Kosovo.

For most professionals, there is a prescribed career path to follow. When that leads to success, it's time to revel -- or even rest on your laurels. Not so, however, for William "Bill" Crawford, MD. When he reached the pinnacle of a legal career, he couldn't stop the niggling thought that maybe he should have been a physician.

It all went back to a dilemma he faced in college. He found science fascinating and considered medical school. Instead, the lure of the complexities of the legal field took him to Emory University School of Law, the attorney general's office, and ultimately to the Alabama Supreme Court.

With then Attorney General Bill Prior's office, Clifford litigated some of the state's most important issues at the time, including such benchmark cases as the Americans with Disabilities Act.

"We were involved in some interesting issues and were able to be part of how the state integrated itself into the national framework," Clifford said.

It was there that Clifford also met his wife, Jennifer Nalu, who was working in the white-collar crime division.

"I worked in constitutional law for a while, then with a law firm in litigation, and I paid off my student loans," Clifford said. "After working with the Supreme Court and the Alabama Supreme Court, I felt like I had accomplished my goals. I'd always wanted to be a doctor. So I started taking classes at night and on weekends just to see how I liked it."

When Clifford wasn't at the law firm, he was studying medicine -- balancing a successful career as a litigator with the drive that kept pushing him to do more.

"It just snowballed," Clifford said. "I realized I really wanted to help people. That had been my motivation all along. People change careers lots of times. I never saw it as a barrier."

Clifford earned his medical degree at UAB before completing his family medicine residencies at the Mayo Clinic School of Graduate Medical Education in Florida and at the University of Alabama program in Tuscaloosa. His goal to help people led Clifford to primary care, turning down an opportunity to go into internal medicine at Yale.

"I wanted to take care of regular people on a daily basis and get to know them," Clifford said. "That's why I'm in family medicine."

Medicine runs in Clifford's family. His father and grandfather were general surgeons. One of his sisters is in a radiology fellowship at Emory University, and the other is a nurse practitioner. There are six other physicians among the aunts and uncles in his family.

"I had always had this background and love of medicine, but when I talked about becoming a doctor, my wife wasn't very happy at first," Clifford said.

After all, he was a success in the legal field and could continue to rise in the profession. She, too, was building her career and is now a judge in the Shelby County court system.

"It was a big change," he said. "Here you are, both with established careers, and I'm going to go to medical school. Even for young doctors, being on-call is tough. My wife is the hero of it all. She's done the hardest work."

In addition to her judgeship, the two have a four-year-old daughter. It was a natural decision to remain in Birmingham, and after a residency at the Mayo Clinic, Clifford returned to practice at Grandview in Chelsea, finding fulfillment in his relationship with his patients.

It's a success story beyond what most achieve in a lifetime, but Clifford wasn't finished there. He made a commitment to his country by joining the National Guard. A captain now, he has served active duty, traveling to Afghanistan (2012-13) and Kosovo (2014-15) in service to the troops.

"Being a doctor in the army is the best job in the world," Clifford said. "You get to take care of people who love this country and who are the best and brightest. Who wouldn't want to do that?"

Just before joining Grandview, Clifford was in Kosovo on a mission with a NATO peace-keeping force. As a flight surgeon responding to emergency calls, he's a veteran of numerous missions on the army's workhorse Chinook and Blackhawk helicopters. In Afghanistan, he ran a small emergency clinic.

"I got lucky," he said. "I basically got to fulfill all my dreams. How can you not be happy doing that? I practiced law for nine years. I love flying army aircraft. I love being a doctor."

Clifford's philosophy sums it up: "Never stop moving. Never stop to look behind you. Always keep looking forward. If you do that everyday, things tend to work out."