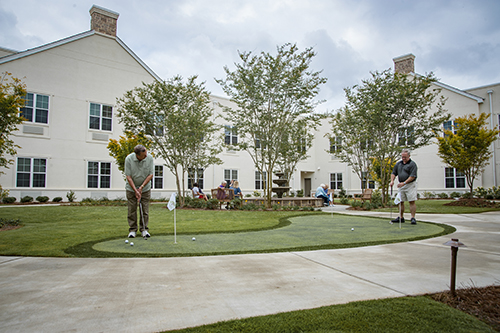 Guests putting on the green at the Aspire Physical Recovery Center at Cahaba River. 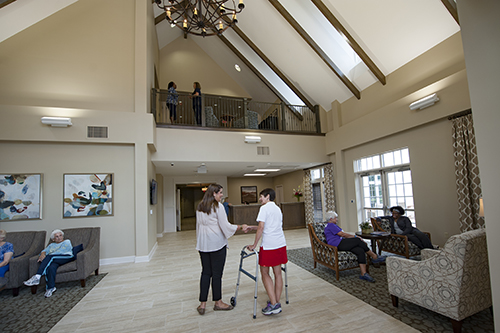 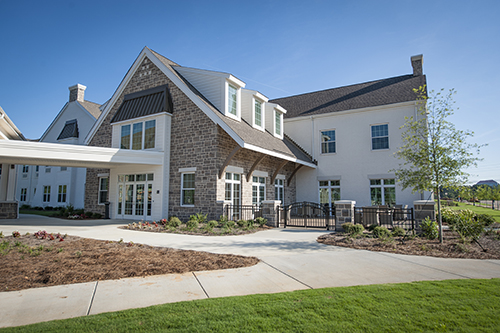 "We don't consider those who come here for rehabilitation as residents or patients, they're guests and we call them guests," says Landie Acker-Langley, admissions coordinator at the Aspire Physical Recovery Center at Cahaba River, a new short-term rehabilitation facility in Vestavia Hills.

Located off Acton Road, near Grandview Medical Center, the guest-oriented perspective permeates the 95,000-square-foot facility that sits amid six acres. "When you walk in, you feel like you're at a five-star hotel," Acker-Langley says. "But you're in a skilled nursing facility."

The hotel experience begins every day with a concierge who speaks with each patient, taking their specialty requests along with menu orders. Prepared by an executive chef, meals are served individually to each patient in the restaurant-style dining room located in each of the four wings. "Guests are also welcome to take meals in their room," says Matt Matlock, rehab director, adding that culinary staff will ask patients who appear apathetic for another preference. "I've seen our staff making a grilled cheese sandwich several times."

Each of the 120 private suites continues the sense of pampering with Wifi, cable, a mini fridge, and a personal bath with shower. "We're modeled after the Ritz-Carlton. So we have granite countertops, tiled showers, white tablecloths, china," Matlock says. "We're a step above." Several of the rooms in each wing offer full-size, fold-out couches for visitors to stay with the patient.

The state-of-the-art feel extends into the two therapy gyms, covering a combined 9,000 square feet, with an Omni RV machine. "It's like a therapy version of a Wii," Matlock says. "There are tasks for each discipline of therapy -- occupational, physical, and speech." The device engages the patient to work on balance, strength or cognition through interactive tasks with a large TV screen. "It can alternate the task's intensity and track guests' progress so we have an objective way to measure their outcomes."

To progress the therapy needed by those unable to stand by themselves, the gyms have an overhead track support system that takes zero to 100 percent of the weight off the patient. "This allows them to hang from the ceiling and get them up on their feet much sooner for therapy activities," Matlock says. "They are no longer restricted to doing activities in a chair." Several of the guest rooms include the same overhead support system for ease in moving patients in and out of bed, such as those recovering from strokes.

Therapy also extends beyond the gyms into a full-size kitchen. "So you can practice daily living tasks in a real environment," Matlock says. The facilities include a dishwasher and a laundry area. "All the things that you need to do to prepare to go home."

Therapy options continue outside in a landscaped, protected courtyard with sidewalks and a walking track, along with a putting green used for strength and balance tasks.

"Guests can take advantage of the putting green for recreational use as well," Matlock says. In addition, a licensed recreational therapist organizes other enrichment activities every day ranging from wine tasting and live music to cooking lessons and pet visits. Other amenities at Aspire include spa services for manicures, pedicures, hair styling, and a range of massages.

Besides the usual patients in need of short-term care, "We also appeal to guests who wouldn't want to go to a traditional skilled nursing setting," Matlock says, such as baby boomers who may not qualify for traditional rehabilitation facilities because they lack the comorbidities. "This is a skilled nursing facility, but guests feel more like they're in a hotel with round-the-clock nursing care. You have a set of eyes on you 24 hours a day, which you don't have at home."

Next year, Aspire will roll out a cardiac rehab program. Patients recovering from procedures and conditions, such as a heart attack, myocardial infarction (MI), or stent surgery, will receive targeted care. "It's a written program tailored to certain diagnosis and conditions overseen by a nurse practitioner with a cardiac background," Cornelius says.

This new location is the third Aspire Physical Recovery Center opened in the Birmingham area by Northport Health Services. The first facility opened in Hoover in late 2014, and another opened in Northport earlier this summer.

"We hope this center becomes the preferred choice for people who need short-term rehabilitation," Cornelius says. "We're unique. We've engineered the institution feel out of the skilled nursing facility."