Sequencing the DNA Profile of Patients with Specific Diseases 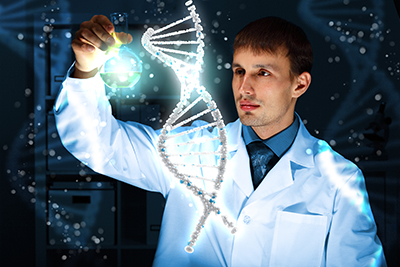 For most physicians, difficult conversations come with the territory.

After the initial shock of hearing a serious diagnosis and absorbing what the prognosis could mean, the next question patients often ask is why. Why me? Why now?

In diseases like cancer, a geneticist might say the predisposition could have been written in the patient's DNA at birth, or perhaps environmental stresses flipped an epigenetic switch or triggered a mutation. Scientists in the growing field of immunogenomics are looking at another influence that could affect when predisposition becomes disease or whether a mutation in a single cell grows into a tumor.

Even identical twins with identical genes don't have identical health, and there isn't always a factor like smoking or diet or chemical exposure that explains why. One may have a disease that the other doesn't develop until later--or perhaps never. As identical as twins can be, there is one way their bodies are at least 81 percent different--their individual immune repertoire of T cell and B cell receptors.

"The immune system is always working on something. It is always a moving picture, as the body continues to make new T cells and B cells. First they learn what is the body and what is not. If they encounter an enemy and defeat it, they become part of the body's immune memory. Next time that enemy is encountered, more cells like that one will be sent out to fight it. That's how vaccines work," Jian Han, MD, PhD said.

A highly regarded immunogenomics researcher at Huntsville's HudsonAlpha Institute of Biotechnology, Han was chair of the third International Immunogenomics Conference in Huntsville in September, where more than 200 researchers from around the world met to discuss the latest findings in genomics and immunity in diseases.

Han is coordinating the international Repertoire 10K (R10K) project, which is in the process of sequencing the immune repertoire of 100 patients each for 100 serious diseases. After the first 1,000 samples from North America, Europe and Asia were sequenced and analyzed, interesting patterns began to emerge.

"We've identified millions of unique T-cell receptors in these patients. In each person, around 81 percent of the receptors are unique to that individual. They may share 12 percent with three other people on earth. About seven percent may be found in another 100 people in the world. Only 1.1 percent of these receptors are highly shared," Han said.

The purpose of the R10K project is to sequence and analyze the DNA profile and the T cell and B cell receptors of patients with specific diseases to uncover disease mechanisms, identify new biomarkers, and guide the development of new therapeutics.

Another goal of the work is to develop a simple, inexpensive and accurate method to determine a patient's health index--a snapshot of the current state of the health of a patient's immune system and its readiness to fight off disease.

"People sometimes think of the immune system as an unlimited resource, but it's more like a nation's defense budget. If the budget is spent on a diverse mix of weapons systems, it should be able to defend against many types of attacks. But if the entire budget is spent on building a navy and the next battle is in Afghanistan, you'd be in a war without weapons." What creates such immune system imbalances is the next big question. Answering it could open up new avenues for preventing and treating diseases. Another question that may be answered sooner is whether there is a way to shift some of the body's immune resources to support the area under attack.

"Many possibilities have been suggested to boost the immune system--Vitamin D, changes in diet, support to improve the microbiome, new medications--the problem until now has been that there wasn't a way to test in a timely manner to see whether a therapy is working," Han said. "We have now developed a simple test that shows what is currently going on in the immune system. It is awaiting FDA approval, and we hope to have it available by early next year.

"We've been able to determine what a health immune system looks like. Soon, physicians will be able to not only order a blood test to get a white cell count--they will be able to see what kinds of T cells are present, how diverse they are, and how ready the patient's immune system is to fight off diseases."