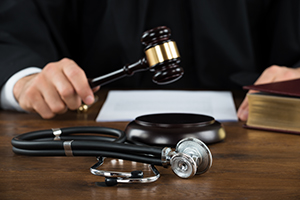 Part art, part science delivered by imperfect humans and impacted by hundreds of variables from a tiny protein on a gene to an individual's age and socioeconomic status - the practice of medicine is anything but predictable.

In a high-stakes field where outcomes aren't guaranteed and emotions run extremely high, perhaps the question isn't why a malpractice suit is ever filed ... but why it doesn't happen more often? Two experts with State Volunteer Mutual Insurance Company (SVMIC) recently made time to speak with Medical News and share some insights to help minimize risk of litigation by instituting best practices on the front end, as well as steps to take in the event a claim is asserted.

"Based on the ongoing analysis of our internal claims for malpractice trends and risk issues, as well as review of national data such as the PIAA data sharing information, we focus on four primary areas when educating our policyholders on patient safety and risk mitigation - communication, documentation, systems/processes, and medication management," explained Shelly Weatherly, JD, vice president of Risk Education and Evaluation Services for SVMIC.

"Decades of research tends to support the fact that 75-80 percent of malpractice claims arise out of communication breakdowns," she continued. While patients and family member are naturally upset when faced with a bad outcome, Weatherly said they often express that what was more upsetting was the way the situation was handled.

Worried that anything said could be used against them, Weatherly noted the natural inclination is for physicians to run away from the situation and avoid it. Instead, she counseled, providers should "be running right towards it." She added there are ways of expressing sympathy for a poor or unexpected outcome without admitting to, or being guilty of, malpractice.

She continued that it's also okay to say 'I don't know how this happened,' as long as it's followed up with 'but I'm going to investigate and get you some answers.' Weatherly added, "That goes a long way to diffuse anger."

Effective communication, Weatherly continued, begins long before a problem arises. "Establishing rapport with patients and maintaining it in the face of an adverse outcome is crucial for malpractice avoidance," she said. "Rapport is established by building trust and creating good first impressions and is maintained with honest and open communication at all times.

While appropriate communication is paramount in malpractice avoidance, there are a number of other areas that are also critical. "Maintaining a well-documented medical record is vital both from a patient care and risk management standpoint," she said. Medication errors also account for a significant percentage of medical liability claims. A discussion about proper dosing and potential risks, benefits, side effects and alternatives should occur on the front end, be periodically reviewed, and be documented in the medical record.

Weatherly added that ineffective systems and processes could also contribute to poor outcomes. "At SVMIC, we continue to see failure to diagnose as a number one claim," she said. "Most often, the problem doesn't lie with the physician's lack of clinical skills or abilities, but rather is the result of a breakdown in office processes."

"Not every bad outcome is malpractice. We would like to live in a world where perfect happens every time, but unfortunately, that's not realistic. There are risks and benefits to every modality a physician chooses," said Kenneth W. Rucker, JD, vice president of Claims for SVMIC.

Echoing Weatherly's sentiments, he noted, "A natural tendency for many physicians is to avoid the patient and family when there is a disappointing outcome." However, he continued, "Many times a patient or family member seeks the advice of an attorney when they feel they have not had their questions adequately answered."

Although encouraging open lines of communication on the front end, he noted, "Physicians have different levels of communication skills. Sometimes patients hear what they want to hear. We find physicians feel like what they said was misconstrued." He also cautioned providers not to float theories or possibilities while trying to figure out why an unanticipated event occurred.

"During this time, it is important not to speculate, as speculation often leads to incorrect information being conveyed, which will have to be corrected and may also damage your credibility with the patient or family," Rucker said. "Expressing empathy for the circumstances is appropriate, but one should be careful not to use the words 'error' or 'mistake' unless one has actually occurred."

He added that even though steps could and should be taken to avoid a claim being asserted, "most providers will face an allegation of malpractice during the course of his or her career." Whether or not a physician believes such a claim has merit, the game plan changes once a patient or family reaches that point. At this juncture, Rucker noted, "Plaintiffs' attorneys will go back and look with a microscope at everything that was done with the benefit of hindsight."

Rucker continued, "Once (physicians) know a claim is being asserted, they need to contact their malpractice carrier in order to protect themselves under their insurance policy and also to obtain guidance as to how to proceed."

He said medical records should be secured and preserved without modification; and providers should halt independent research, which could be subject to discovery in the event litigation is pursued. He also said communication should be more guarded. "At this point, you should avoid directly engaging the patient, the family, or their attorney in dialogue." Rucker added that physicians also should refrain from discussing the issue with colleagues since those conversations could also be subject to discovery.

That said, physicians should not be hesitant to communicate with their malpractice provider. From sharing important insights into the steps leading up to the claim to simply needing an opportunity to vent frustrations, most malpractice carriers think of themselves as partners to their physician clients and are there to represent the physician's interests and help manage the entire process.