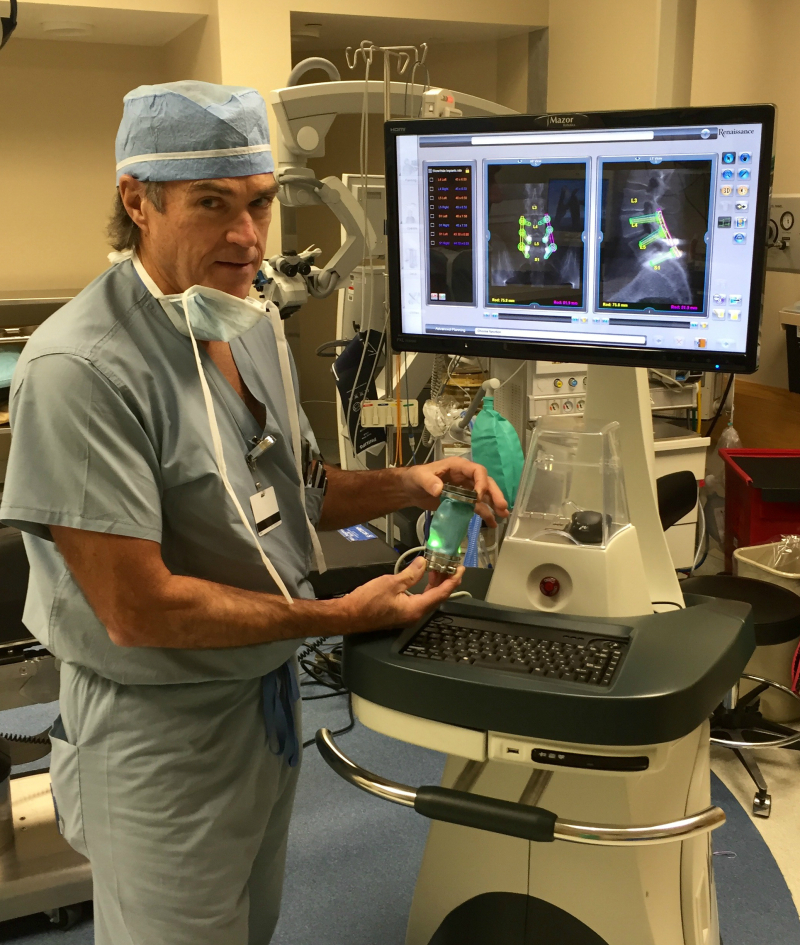 "The big thing that drew me to this was the decrease in radiation," says Charles H. Clark III, MD, a neurosurgeon with Neurosurgical Associates in Birmingham, about the new robotic technology for surgical lumbar spinal fusions. "In the past, we used four to five minutes of fluoroscopy during the procedure. Now we're down to less than a minute."

Previously, visual access to the spine relied on a large incision running six to eight inches, along with regular x-rays during the surgery. Although a minimally invasive option has been available, it required notably more x-rays to compensate for the loss of direct sight. "That procedure was done in some places, but I didn't want to expose my patients or myself to that level of radiation," Clark says.

The new technology dissolves that obstacle, reducing the incision size for the screw placement to as small as an inch.

Currently available in Alabama only at St. Vincent's Birmingham, the Mazor Robotics Renaissance Guidance System brings computer precision to spinal fusions -- the delicate process of inserting screws into the vertebrae to create some immobility in that area. "No two people's spine looks exactly alike and, depending on the degree of arthritic changes or scoliosis, that change made it difficult in the past to be precisely accurate," Clark says. "This technology changes that."

It begins with 3D planning for placement of the pedicle screws. "It used to be a challenge to plan where to place screws satisfactorily," Clark says. "But now we can view that area before the surgery, so we can see all of our options."

Previously, x-rays offered the only pre-operative view of the vertebrae. With the Renaissance System, a CAT scan of the patient's spine feeds into the software which creates a virtual 3D rendering of the area that can be manipulated and viewed from all three surgical planes.

Using the 3D view on their computer, surgeons can choose different-sized screws and move them with the mouse or touchpad to exactly the angle and placement they want in the vertebrae. "You can use that animation to watch the screw go in while you're still in the office," Clark says.

The surgeon then locks that screw location into the software. In the surgical suite, the robotic arm of the system pulls the data from that plan to position instruments to that exact location on the patient's spine. The planning stage now takes only about 20 minutes.

With the aid of the system in the operating room, the surgery time has also dropped from three hours to less than two. Using open or minimally invasive incisions, a platform is mounted to the patient's spine. A 3D marker attaches to the platform. Then two fluoroscopic images communicate with the robotic system to sync the patient's intra-operative anatomy with the pre-operative CT scan.

That information allows the robot to register the pre-operative plan to each vertebra's position regardless to changes in the inter-vertebral space, and then position the tools to within a 1.5 millimeter accuracy. "I still have control," Clark says. "I use my hands to feel the probes and drill, but I'm doing it through the robotic arm that's guiding me to the planned location."

Since January when it was installed at St. Vincent's, Clark has performed about 25 procedures using the new technology. His first patient was a 73-year-old woman who had undergone multiple back surgeries in in the past five years. Three weeks after her spinal fusion utilizing the Renaissance system, "she was standing straight up and acting like a new woman," Clark says. "She was tickled."

This new approach with the increased accuracy and small incisions, has dropped complications for this type of surgery by 50 percent, including infections, and reduced the blood loss by about 20 percent. The minimally invasive approach also means a quicker recovery.

"I wouldn't go back to the old way," Clark says. "You take all these improvements of safety and accuracy and add it up, and it's a great technology for us and particularly for our patients."

Clark sees more options for the system beyond spinal fusions. "This is primarily how we use the machine now," he says. "But there are other potential uses, including to biopsy spinal tumors, culture disks for possible infections, or to perform kyphoplasty. It could even be used for brain biopsies; but one thing at a time."