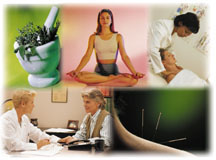 Voodoo, witchcraft, quackery ... holistic and complementary and alternative medicine (CAM) practitioners have heard it all. The good ones will readily agree that some of what is out there passing for CAM therapies is nothing more than snake oil. However, they will also quickly point out that an increasing portion of their field is not only sound medicine but also has a growing body of scientific research to support its claims. Many traditional practitioners actually integrate some CAM therapies and holistic philosophies into their practice perhaps without even being cognizant of the fact. Holistic medicine is based on the theory that a patient is more than simply the sum of his or her parts. For the best health, a patient must strive to optimize body, mind and spirit. Any physician who has ever referred a patient to a mental health professional in addition to writing out a prescription for antidepressants has integrated holistic theory into their practice. Any physician who has counseled an obese patient to lose weight and then helped them craft a nutritious diet and a safe exercise program in an effort to get them off of medication for Type II diabetes has suggested an alternative course. Any physician who has ever implanted a stent and then given their patient a heart-healthy diet to follow upon dismissal from the hospital has suggested a complementary therapy. In addition to fairly mainstream CAM applications such as chiropractic care, massage therapy, yoga and balanced nutrition, there is a growing interest among consumers in other Eastern ideals including acupuncture, herbal remedies and energy flow. Dr. Bruce Clark, DPH, co-founder of Age Wave LLC, recently addressed the habits and characteristics of different generations with a Nashville healthcare audience. Interestingly, the Baby Boom generation, which transforms every lifestage they inhabit by sheer numbers, is very open to the concept of CAM and has already helped turn it into a $50 billion industry. "This is a consumer who is widely and deeply embracing complementary and alternative medicines," Clark said. "This is interesting, especially if you're in an entrepreneurial mode," he continued. "In the world of 'serious' healthcare when we're looking for new profit centers, we could look here," Clark added pragmatically. In a recent survey of healthcare professionals conducted by his firm, Clark said physicians voiced the opinion that there is not enough evidence-based research on CAM but also expressed a "reluctant acceptance." As a matter of fact, only 13 percent of the doctors surveyed were "actively opposed" to complementary and alternative medicine. Whether or not physicians embrace the tenants of CAM, they have to be aware that their patients are at least open to the idea if not downright intrigued by it. Therefore, the argument can be made that at least looking into what is encompassed by CAM and holistic practices is important as "traditional" physicians attempt to guide patients toward what may be beneficial and away from practices that are a waste of money or even harmful. Everyone Is Doing It To assuage any doubt as to the popularity of some complementary and alternative therapies, simply look at any given block in any major city. You will find a plethora of yoga studios, massage therapists and spa treatments, chiropractors and nutritional supplements. Yoga wear has officially become a fashion statement, and every major grocery chain and drugstore carries dietary supplements of some sort. Furthermore, even the insurance industry has jumped on the CAM bandwagon. With more than two million members, BlueCross BlueShield of Tennessee is the state's largest health benefits provider. The company's BluePerks(r) allows members to receive discounts of up to 30 percent on non-covered CAM services including the purchase of vitamins, massage therapy, Tai Chi classes, spas, and health magazine subscriptions among other options. BluePerks is a network of nationwide partnerships allowing BCBS-TN members to receive discounts across the country at affiliated businesses. One such partnership is with American WholeHealth, Inc., which has more than 28,000 affiliated practitioners in 36 CAM disciplines. Perhaps the most legitimizing measure, however, was the formation of the National Center for Complementary and Alternative Medicine (NCCAM) ... a center under the National Institutes of Health. In October 1991, the U.S. Congress passed legislation that created $2 million in funding to establish the Office of Alternative Medicine (OAM) within the NIH to "investigate and evaluate promising unconventional medical practices." Seven years later, in October 1998, Congress elevated the status of the OAM to become a true NIH Center by establishing NCCAM. True to their NIH heritage, NCCAM is all about research and verifiable evidence. Their mission statement proclaims, "NCCAM is dedicated to exploring complementary and alternative healing practices in the context of rigorous science; training complementary and alternative medicine (CAM) researchers; and disseminating authoritative information to the public and professionals." This past May, NCCAM and the National Center for Health Statistics (NCHS, part of the CDC) released the most comprehensive findings to date on American's use of CAM. The data came from the 2002 edition of the NCHS' annual National Health Interview Survey in which more than 31,000 adults participated. Findings of interest included: o In the United States, 36 percent of adults use some form of CAM. If megavitamin therapy and prayer specifically for health reasons are included in the definition of CAM, then the number jumps to 62 percent. o Use of CAM covers all races and backgrounds. However, the survey highlighted some people who are more likely than others to use CAM. These groups include: women more so than men, people with higher education levels, people who have been hospitalized in the past 12 months, and reformed smokers (in comparison to those who have never smoked or those who are still smoking). When megavitamin and prayer for health are excluded, Asians lead CAM use with 43.1 percent followed by Caucasians at 35.9 percent. When megavitamins and prayer are included, African-Americans led the way with 71.3 percent using CAM. Asians, Hispanics and Caucasians follow with 61.7, 61.4 and 60.4 respectively. (See Graph) For more detailed information on the findings, go to www.nccam.nih.gov/health and click on "Statistics on CAM Use."